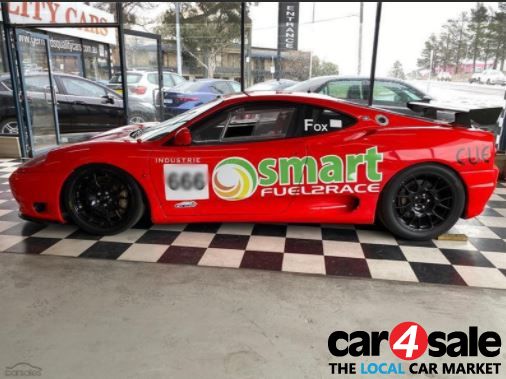 Deep Discount Direct owner price (no middle man): Quality GuaranteedPlease WhatsApp +447537105452 (Direct Owner Number)
2000 model Challenge Cup car which is a Factory Built and delivered pure race car. It is CAMS Log booked as Production Sports Car and as such has raced in Australian CAMS NSW State Championships under Production Sports Cars. The car is ready to race as is.


The Dash and race system fitted to the car is Magneti Marelli  A laptop that is able to download and interpret race data is included in the sale of the car.


Some details on the car are listed below.


Based on the 360 Modena road car, the 360 Modena Challenge was an extensively reworked, track-oriented model intended to compete in Ferrari's one-make racing series called the 'Ferrari Challenge.'[18] It was only available with the electrohydraulic-actuated automated manual transmission. At the time of launch, Ferrari claimed the 360 Modena Challenge accelerated from 0 to 100 km/h (62 mph) in 3.9 seconds (0.6 seconds quicker than the standard 360 Modena F1) and could corner and brake significantly faster than the road car due to added aerodynamic elements. Brembo racing provided the upgraded Gold coloured calipers and larger floating 2-piece discs, while Bosch provided the race-oriented ABS software. The exhaust system was lightened substantially and was one of the main contributions to the increased power output over the standard engine (as ignition mapping was claimed to virtually be the same). For the road cars (even the Challenge Stradale) Ferrari used a valve system that made the car more socially acceptable at lower revs (and therefore able to pass drive-by noise tests).
Less than 200 were made and marketed by Ferrari as a pure race car, requiring purchasers to enter the Ferrari F360 Challenge into the Ferrari Challenge race series as a condition of sale.
Unlike the previous Challenge race series, which utilised an F355 road car with a dealer-installed 'challenge upgrade' kit, the 360 Modena Challenge was a factory-built track car. The enhanced driving characteristics and substantial weight reduction meant the car could comfortably outperform its road-going counterpart even though power from the 3.6-litre engine was claimed to be similar.
The 360 Modena Challenge featured a stripped-down race-oriented interior with the stereo, electric windows and locks, soundproofing, airbags, air-conditioning, and even the handbrake removed. The seats and restraints were replaced by a single carbon-fibre racing seat and FIA approved restraint harnesses, and a roll cage was fitted for safety along with a fire suppression system. The instrument cluster was reworked with a monochrome LCD to display vital engine data. The adaptive suspension of the road car was replaced by adjustable racing dampers, while larger brakes with extra cooling ducts were added.


The truck that is included as part of the race package is a 2004 Mitsubishi Fighter 16 Ton GVM with an 8 Meter Fridge type Pan with a two ton tailgate loader. The tailGate Loader has been extended to support the loading and loading of the Car into the back of the truck.
The truck is fitted with a tool box and tyre racks along with a kitchen up the front.
The truck is in good order with Brand new steer tyres and is ready for rego.
GERHARDS QUALITY CARS BEEN IN BUSINESS FOR 26 YEARS  -   WE TARGET HIGH QUALITY  DESIRABLE  VEHICLES AND  GERHARD RESPECTFULLY ONLY  EMPLOYS  " NO - HIGH PRESSURE SALES STAFF "  -  THIS IS JUST ANOTHER EXAMPLE OF THE VERY  HIGH QUALITY  CARS WE STOCK,  -     BY APPOINTMENT WE ALSO OPEN SUNDAY- PUBLIC HOLIDAYS AND AFTER HOURS   -  EASY FINANCE    UP TO 5 YEAR  AUSTRALIA WIDE EXTENDED WARRANTY AVAILABLE  AND    INTERSTATE DELIVERY CAN BE ARRANGED.  IF YOU ARE LOOKING TO SELL  OR TRADE YOUR  VEHICLE  FEEL FREE TO CONTACT US FOR AN OBLIGATION FREE OFFER.
Deep Discount Direct owner price (no middle man): Quality GuaranteedPlease WhatsApp +447537105452 (Direct Owner Number)